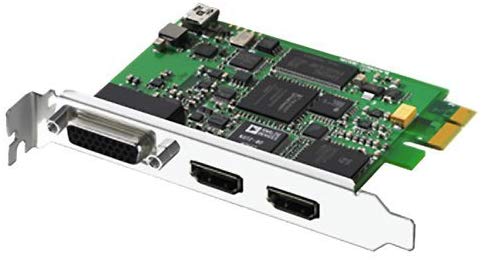 Add the incredible quality of HDMI to your computer. Intensity features the latest HDMI technology for the highest quality capture and playback on Windows™ or Mac OS X™ computers. Now you can edit using big-screen HDMI televisions and video projectors, or capture uncompressed quality from HDV cameras

Intensity features HDMI-in for connecting to cameras and digital set-top boxes for the highest quality capture. Get higher quality capture from HD cameras by capturing direct and bypassing the HDV compression chip for high quality video captured direct from the image sensor. As edit software cant play back to HDV cameras for monitoring, Intensity is ideal to use for monitoring uncompressed HD or HDV, and even DV edits on the latest big screen televisions and video projectors by connecting to the built-in HDMI out.

Plug into Windows™ or Mac OS X™ computers with the same card, and use your favorite software, including Final Cut Pro™, Premiere Pro, After Effects, Photoshop, Fusion™ and many more. Intensity is fully DirectShow™ and QuickTime™ compatible, which adds HDMI capture and playback ability to your computer. DirectShow and QuickTime™ allows Intensity to work with a wide range of software for editing, design and paint, through to the exciting video utility software that allows custom desktop based video solutions. Blackmagic Media Express is also included for easy capture and playback of real time HD and SD video.

Instantly switch between HD and SD video standards including HDTV 1080i/59.94, 1080i/50, 720p/59.94, 720p/50, NTSC and PAL. Intensity allows capture in professional file formats which are fully compatible with Blackmagic Design’s DeckLink and Multibridge capture cards, so you can deliver finished television programs, music videos and other work at broadcast standards.

Formats such as HDV and DV use video compression for smaller and easier to manage files, however this sacrifices image quality, and in the case of HDV you dont even get full resolution 1920 x 1080 HDTV video. That means HDV is not really HD! Uncompressed video capture with perfect quality video is now easy thanks to modern and fast computer hard disks. Uncompressed video won’t suffer from generation loss and always looks amazingly clean and sharp. Uncompressed video also renders faster as you don’t waste CPU time with video compression. Now 100% of your CPU time can be used rendering your effects!

Intensity uses full resolution HDTV, which is a massive 1920 x 1080 pixels for every video frame. HDV only uses 1440 pixels wide due to the limitations of the small cassette tapes used and the FireWire speeds build into the cameras. However the newer cameras being released, such as the Sony HDR-HC3 have built-in HDMI video output which allow access to the raw uncompressed video from the CCD directly. That provides incredible quality. If youre capturing off HDV tape, you can still enjoy editing video in full resolution, so your graphics and effects look sharp because only uncompressed video eliminates the horizontal scaling that’s required when rendering HDV footage with graphics and effects.

HDV and DV also use heavy compression. With HDV, the compression is time based which loads up the system CPU as the editing software reassembles the video just to display each frame in the video. With Intensity youre working in uncompressed, so all CPU time is free for real time effects and the system feels snappy and fast to use. Because uncompressed video in HD requires a fast disk array, to save cost you can also choose compressed video that’s higher quality than HDV. For example you can use DV 100 codec on Mac OS X™ which is 4 times better quality than HDV, or on Windows™ you can choose our new full resolution JPEG codec.

HDMI doesnt use compression so you can record video without video compression, or choose a better compression more compatible with the work your doing. HDV and DV are limited to 4:1:1 color sampling, so you only get 1-red and 1-blue video pixel for every 4 pixels in your image. This blurs color and causes serious color bleed on deep colors and destroys the crispness of your images. HDMI uses 4:2:2 video which has twice the color resolution, so your video won’t suffer soft and smeared color.

•  Down Conversion and Real Time Effects